On Friday, the International Labor Organization (ILO) held a side meeting on creation of decent jobs for the transition to a sustainable economy. Jane Stewart, chairperson and Special Representative for the ILO, opened the discussion by acknowledging the inter-linkage between environment, economy, and the creation of jobs. She argued, “Environmental sustainability is an economic driver, which in turn, is essential to growth in the job market.” In addition, she stated that social protection of individuals, especially women and children, is essential, as it gives empowerment that results in new employment opportunities worldwide. She closed her brief opening statement by claiming that a sustainable economy can produce higher quality jobs for the market. She elaborated on her argument, by addressing Green Jobs, which is a term used to describe work in manufacture, agriculture, research and development, and service activities that contribute to preserving and restoring the environment.

Taking Ms. Stewart’s argument further, both Mr. Harris and Mr. Dos Santos elaborated on the idea of green jobs. Their data showed that the renewable energy sector generates significantly more jobs than the fossil fuel-based energy sector per average megawatt. Moreover, Mr. Harris and Mr. Dos Santos, were both firm believers that this new creation of jobs would, “restore the financial system and put the economy on a sustainable path.” 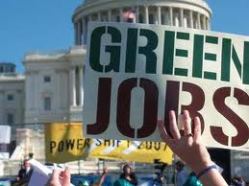 Stephen Contius, of Germany, opened his statement by highlighting the first MDG, which was put in place to improve employment for all, including women and young people. He also addressed the issue of extremely low wages, with more than 370 million still making less than $1.25 per day. He shifted the gears of the discussion by speaking about the fundamental issues of sustainability, such as inequality, poverty, technology, and access to health and education services. Although technology seems like a solution, rather than a problem, Mr. Contius argued that training programs and digital skills must be taught on a large scale to take advantage of such technologies. Moreover, Contius claimed that the training in and of itself would produce thousands of jobs, particularly in underdeveloped countries. He closed his statement, as well as the discussion, by stating, “There need not be at tradeoff between sustainable development and the creation of high quality jobs, we just have to take the proper steps in finding the balance.”

Meeting Title:  Decent Jobs in the Transition to a Sustainable Economy