The Arms Trade Treaty regulates the international trade of conventional arms.
It aims to promote peace and security by preventing ‘un-governed’ trade of arms in conflict regions;
prevent human rights violations; and ensure that weapons aren’t acquired by criminal groups. 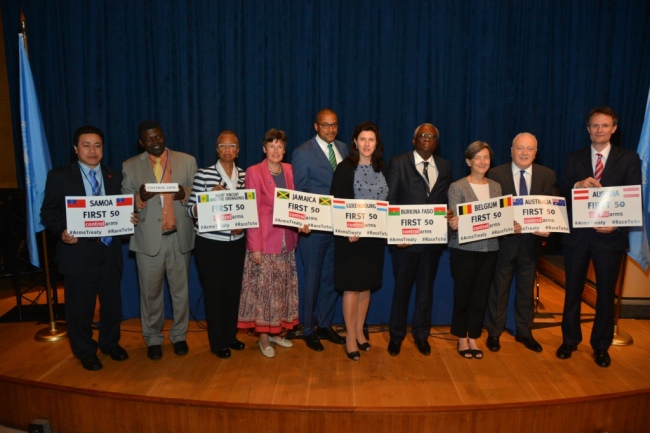 Today at the United Nations Headquarters, a special event marked one year of the ratification of the Arms Trade Treaty (ATT) and a ceremony for newly ratified nations. Eight countries, namely: Australia, Austria, Belgium, Japan, Luxembourg, Samoa, Saint Vincent and the Grenadines, and Trinidad and Tobago ratified the ATT. Thus raising the total number of ratifications to 40, one year after the agreement was opened for signatures. The historic treaty has now been signed by 118 states and will become legally binding in international law after 50 countries ratify.

At least 500,000 people die every year on average as a result of armed violence and conflict, and millions more are displaced and abused. H.E. Mr Gary Quinlan, Ambassador and Permanent Representative of Australia stated that, “by establishing, for the first time, globally-agreed standards for the regulation of the international conventional arms trade, the Arms Trade Treaty will help reduce illegal and irresponsible transfers of weapons which threaten the security of so many countries”. The ambassadors of the respective missions, hosting the event acknowledged and appreciated the commitment of the civil society in ensuring that the states remain honest in their road to the ratification of this treaty. They also urged and encouraged all states, especially those who are the biggest exporters and importers of arms to ratify the treaty.