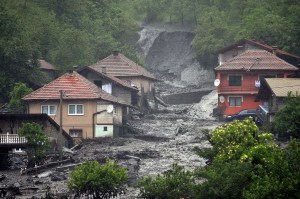 Mr. Eliasson opened the meeting by discussing both the devastating impact these floods have had on the region, and the importance of the next 60 days in assessing the damages and placing the region on a path back to normalcy. Heartened by the solidarity served, Mr. Eliasson enthusiastically commented on the high level of assistance shown by the region’s people, irrespective of the century old political and ethnic strife. To close, Mr. Eliasson commented on the ever-growing threat of natural disasters, which requires us to enhance our ability to work together, as well as strengthen our resilience in building safer conditions for living.

Dr. Lagumdžija continued the panel by focusing on landslides that destroyed almost 750 buildings, and buried landmines, the location of which are now unknown. He also discussed the need to refurbish agriculture, water, sanitation, and other basic necessities, Dr. Lagumdžija said the main priority is on restoring both housing and jobs.

Ms. Sultanoğlu reiterated points on solidarity, but focused mainly on the joint action required between private, regional, and international actors. With the assistance from the UN, these actors need a coordinated response for integrated flood and drought risk management. H.E. Mr. Drobnjak repeated points about housing and land mines, but brought attention to the need of 33 tons of chemicals to fight reemerging mosquito problems. H.E. Mr. Karadžić closed the meeting by reminding the group that while the emergency response was admirable, the upcoming months will test the region’s resilience.