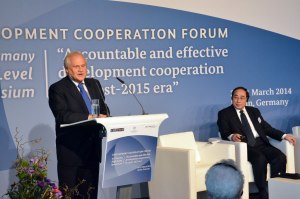 This session of the Development Cooperation Forum (DCF) was organized to allow stakeholders to elaborate how development cooperation will have to change in order to help implement a transformative post 2015 development agenda. The following two key questions were addressed: How will different actors be able to support a unified and universal set of goals, and how can national ownership and coordination be guaranteed in this context?

Mr. Semodji explained the division of labor between different development actors. He said that the role of developing countries, according to the Monterrey Consensus, is that they have to define clear strategies for the basis of their development. The role envisioned for international, multilateral, bilateral and non-governmental actors was that they will be able to provide technical and financial assistance. He said that the international actors have played their role in this regard. However, Mr. Semodji said that there were problems in the implementation of this role. Mr. Premajayantha said that an effective intervention of DCF is crucial. He also emphasized that the coordination of all stakeholders and projects is vital. The key factors for poverty eradication and sustainable development are a peaceful atmosphere in countries, political stability, and effective management of human and physical resources, he explained. Ms. Akhtar called for a much deeper and broader inter-governmental cooperation that institutes an effective global governance system.