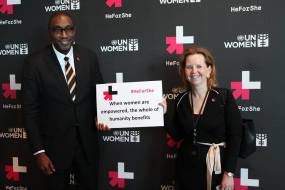 During the Barbershop Conference meeting, “What Makes a Man” Todd Minerson asserted that advocates of gender equality must not compete with or divert resources from support, intervention, or transition efforts for gender-based violence (GBV) victims. He also showed that aspects of masculinity harmed both females and males: an experiment with male students indicated that societal pressure to attain hyper-masculinity manifested in males as emotional illiteracy and coping mechanisms like organized crime and alcoholism. Though the patriarchy has negative implications for men, it is a system that ultimately values masculinity over femininity. Thus, increased equality would mean a loss of male privilege, though that should not deter male allies.

Van de Sand began panel discussion on the topic of male allies. Prime discussed how – as a result of gender equality being framed as a women’s issue, discussion veers away from the structural issues of patriarchy and towards what women aren’t doing right. MacNichol supported the shared leadership of men and women in the movement, but also active acknowledgement of privilege. Agreeing with Prime, Urpilainen spoke of how many perceive gender equality to be a “soft” social issue, when it is a pressing economic matter. She concluded that a successful society requires women, while successful change requires men. Sisic argued that we must approach GBV and equality not expecting men to “give” women a place in society. On the topic of actively supporting gender equality, Prime reasoned that men feared the loss of privilege or felt that not actively opposing was a sufficient contribution. MacNichol added that male allies could help by acknowledging the patriarchy’s impact on women and by seeing gender equality as non-negotiable in decision making. Discussion shifted to focus on women’s role in engaging men, to which Prime spoke of how women are sometimes dismissive of men’s education in gender equality, when women should support and challenge instead. Speaking generally, Urpilainen supported national action plans for gender equality, the elimination of gender norms in all environments, and was personally in favor of gender quotas.

Meeting: Barbershop Conference on “Changing the discourse among men of gender equality”

Sponsor: The Permanent Representatives of the Republic of Suriname and Iceland to the United Nations