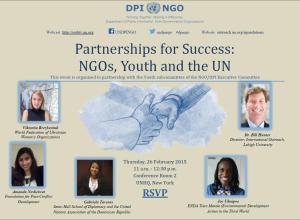 The DPI/NGO Briefing Division organized and led a panel to discuss topics centered on Partnerships for Success: NGOs, Youth, and the UN. Dr. Hunter opened up the panel by asking what youth empowerment means to the audience, and then went on to state that there are over 400 youth representatives that speak on behalf of NGOs worldwide. The next speaker, Ms. Nesheiwat emphasized the point that all youth representatives had the same underlying mission–to create a better future for the world. Ms. Viktoriia then stated, “youth is not an excuse for inaction or an excuse for lack of awareness or responsibility.” She continued by saying that creating a strong network of youth professionals would benefit not only the youth, but society and the United Nations as a whole. Giving a platform to speak about causes important to the representatives is central to empowering the youth. Ms. Taveras listed some of the successes of the UNADR, such as reaching out to over 6,000 students at the International Conference of the Americas. She also expressed social media engagement with youth as a key factor in worldwide change. She then spoke on behalf the Seton Hall School of Diplomacy, and its role in global involvement through its Center for UN and Global Governance Studies. Ms. Taveras spoke passionately about youth involvement,  saying that having a strong desire to change the world is unstoppable. Ms. Ukaigwe discussed ENDA’s various collaborations, such as their Youth in Action Team that partnered with the African Movement of Working Children and Youth to ensure the achievement of all Millennium Development Goals related to children. She also claimed that many of ENDA’s initiatives coincide with the SDGs. She, too, was animated when she discussed youth engagement, convincing the audience of the impact of youth action.