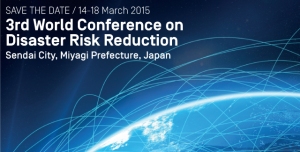 Mr. Meza-Cuadra opened the meeting by saying that sustainable development will not be sustainable without risk reduction. The Secretary-General proclaimed that sustainability starts on March 14th in Sendai, Japan, during the 3rd World Conference on Disaster Risk Reduction. The increased number of natural disasters has cost the world roughly $3 billion each year. The poorest countries are hit hardest when disasters strike, and 90% of fatalities come from low- and middle-income countries. Mr. Maskrey described how the world is reaching a breaking point as 1.5 planets are needed to sustain the current consumptions of water resources and carbon output. Mr. Sareer spoke about how Maldives was ready to transition into a middle-income country; however, it took 10 years to rebuild what the 2004 tsunami destroyed. Food security, water sources, ecosystems, and economies are all at stake with climate change.

Mr. Nkwain mainly spoke about the vulnerability of developing countries. He also mentioned that the information that we have about risk prevention needs to be effectively utilized for it to be useful. Mr. Binger spoke about the Caribbean countries and stated that SIDS have very limited areas of development due to restrictions on land. Developmental assistance needs to focus more on SIDS, as they are the most vulnerable due to their small area and isolated nature. The final speaker was Mr. Mayer, whose main point centered around the need for the world to move towards a culture of disaster prevention. Disaster warning systems need to be relied upon more in order to prevent casualties and infrastructure damage. He finished the speech by stating that it is up to everyone in the room to help implement disaster risk reduction in the future.