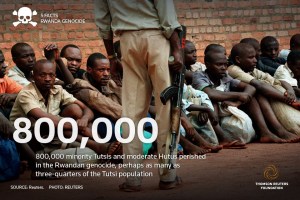 This meeting commemorated the creation of the Jacob Blaustein Institute’s Manual on Human Rights and the Prevention of Genocide. Deputy Secretary-General Eliasson opened the panel by focusing discussion on developing tools to mobilize action.

Permanent Representative Gasana (Rwanda) stated that we are still witnessing major human rights violations in the Central African Republic, Sudan, Iraq, and Kenya that warrant our resolve. Though it is impressive to see the international community’s commitment since the 1994 genocide against the Tutsi, Gasana believes that political will is lacking. Of course, in addition to political will, genocide prevention also requires civilian protection, warning systems, and swift, decisive action based on those warnings. Gasana believes that the current conflict-solving model, in which the Security Council manages genocide rather than preventing it, is problematic. He called upon the Security Council to collaborate more with the Special Office for the Prevention of Genocide.

Mr. Dieng stated that the statement “never again” is already a sign of failure: we must continue to take every effort to prevent what happened in 1994. Furthermore, he wanted everyone to refer to the “genocide in Rwanda” as the “genocide against Tutsi in Rwanda in which Hutu and others who opposed the genocide were killed.” Dieng acknowledged that genocides are not committed in a vacuum; there are usually warning signs. He challenged the international community to pick up on these early warnings of impending violence and immediately begin taking preventative action.

In the Q&A session, someone asked if an overly cautious approach, in which every human rights violation was deemed a genocide, would undermine the significance of the term ‘genocide.’ Eliasson responded that, rather than trying to distinguish ‘genocide candidates,’ we need to analyze each country’s risks on a case-by-case basis.