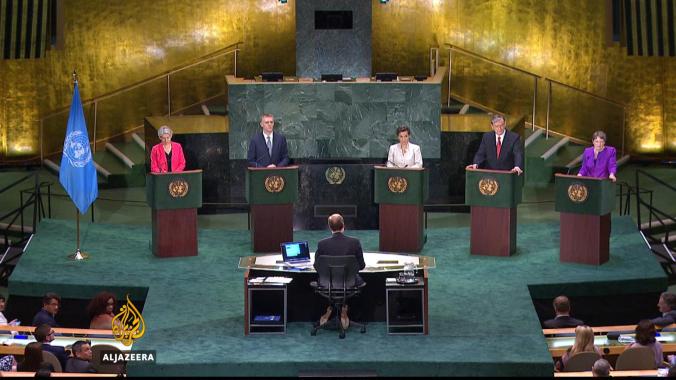 An equal concoction of diplomat and advocate, civil servant and Chief Executive Officer, the UN Secretary-General’s job description is to enshrine the ideals of the UN charter among the foreign relations of 193 member states and to prevent, from the outset, “succeeding generations from the scourge of war”. Yesterday, 12 candidates — 7 women and 5 men — debated on issues ranging from peace and security to gender equality in a first of its kind,  live broadcast event to compete for the organisation’s top position.

Procedurally divided into two panels of six candidates, the debate was moderated by Al Jazeera corespondents James Bay and Folly Thibault and also featured an opportunity for UN ambassadors to ask direct questions to the candidates on controversial issues, such as allegations of sexual abuse by UN peacekeepers. While all candidates depicted a clear logic of intolerance on the issue, Ms. Christiana Figueres strongly condemned such actions by remarking that under her leadership,“immunity would not translate into impunity”.

Though issues such as climate change, gender equality and security council reform attracted comprehensive attention from all candidates, those pertaining to peace and security, remained confined to the usual diplomatic rhetoric on the Syrian war; leaving questions and solutions on illegal occupation and annexation, such as those concerning Russian invasion of Crimea, sanitised from the debate. Mr. Vuk Jeremic and Ms. Susana Malcorra outlined the UN’s stagnation and failure in times of crises and vowed to “deliver results”, while Mr. Antonio Guterres and Ms. Helen Clark primarily focused on reducing human suffering and creating “better opportunities”. Dr. Danilo Turk and Ms. Irina Bokova posited a more multilateral cultural approach toward renovating the UN remarking that, “gender parity and youth inclusion” were top organisational priorities.

The debate in itself holds probative value as all previous Secretary-Generals were chosen behind closed doors by the permanent five. The three hour debate offered a rare peak into the personalities of the candidates on not only their chosen fields of endeavour, but also on the many other grave issues that afflict our world today. However, this seemingly transparent process too contains bureaucratic limitations. While the 193 members can nominate candidates, the five key nation states — US, China, Russia, Britain and France — still make the big decision of inviting a candidate to serve as the new Secretary-General of the United Nations.