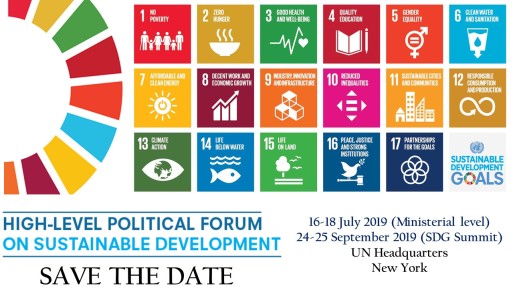 END_OF_DOCUMENT_TOKEN_TO_BE_REPLACED

The UNPD, UNESCO, the Permanent Mission of Argentina, and the Permanent Mission of Austria co-organized such an event on the eve of High-Level Political Forums (HLPF) to set the tones for further discussion on SDG 16 and concerning issues. Ms. Ana Maria Menendez considered the HLPF to be the timing for taking stocks of all efforts reviewing the progress done so far. The forum should also investigate the linkages between SDGs, in particular, goal 5, 10, and 16 concerning the topic of today. On gender equality, society should strive to establish norms and mechanisms to address the problems women and girls face in accessing justice and human rights protection. Goal 10 establishes the principle of non-discrimination in all institutions while goal 16 similarily calls for access to justice for all.

END_OF_DOCUMENT_TOKEN_TO_BE_REPLACED 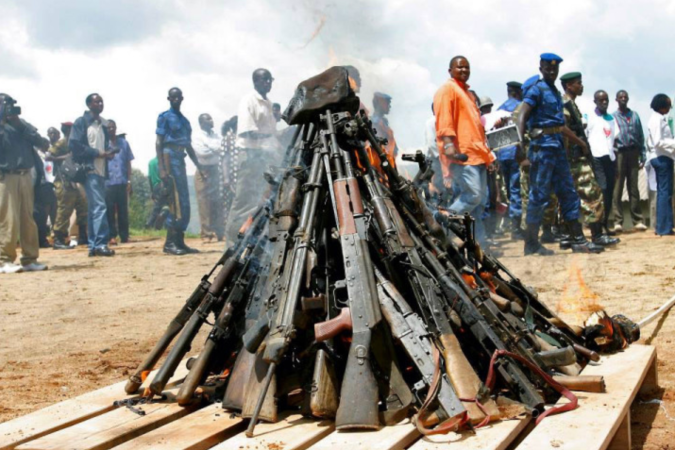 All over the world, people have access to weapons. However, in some areas, it is much easier to gain access to a weapon than others. The increase of these weapons leads to an unnecessary increase in violence. This puts those who are in these communities at a disadvantage because they are much more vulnerable to victimization. Disarmament refers to reducing military efforts as well as weapons. There is actually a UN Office for Disarmament Affairs.

It is important to note that this armed violence can be in both con conflict and non-conflict areas. One speaker mentioned how young boys in South Sudan were reported to have guns. In fact, thousands of children have been recruited and armed for fighting a conflict in areas like South Sudan and Somalia. In the meeting, it was noted that the non-conflict areas also need great attention because of the severe and large quantity of injuries that are occurring. Guns can be easily accessed in both legal and illegal contexts by citizens and there has been an increased spread of small arms.

The main point of this meeting was discussing how gender, just like in other issues, plays a vital role in this violence. While men are reported to be the majority of small arms users, women are noted to be at a disadvantage- economically, socially and psychologically.  A systematic approach, which would require the help of many members states, would be needed to combat this widespread issue. Gender plays a role in the issue, so therefore, it is crucial in implementing the solution. Although women are the primary victims, they should be empowered leaders in fixing the problem. It was brought up that women are underrepresented at government talks and negotiations. It was noted that usually, only 1 in 4 delegates are women and that this number must increase if we hope to make progress.

Led by the Committee on the Elimination of Discrimination against Women at the United Nations Office in Geneva (UNOG), this conference engaged in a number of topics surrounding gender inequality in South-East Asia, specifically in Laos. First addressing the imbalanced gender ratios in education, a lack of data in Laos’ unsystematic education system was evinced, rendering some conclusions drawn in a recent CEDAW report dubious. Remaining in the education sector, the conversation shifted to whether educational capacity investment is being matched by the necessary supporting infrastructure. Developing countries often suffer from virtuous investment being deployed in silos – in Laos’ case, girls seeking education are frequently burdened by inordinate transportation costs or distances. Dual-gender class resistance was another complication barring women from entering education, particularly when educational capacity is limited. Furthermore, there was a floor-wide call to gather more data regarding which educational paths girls are pursuing. If women are being driven into traditionally female fields such as cooking or needlecraft, presenting uncategorised educational data could belie its message. Laos’ 25% female inclusion targets was criticized as too low and as sending the wrong public message about social ideals.

Keeping education in focus, more data was requested regarding the impact that premature pregnancy has on educational drop-out rates amongst women. Collecting such data would provide more precise insights into targeting responsible sexual behaviour and sexual education. However, high birth, maternal death and female STD rates point to ineffective sexual education efforts in Laos. Building on this, it was posited that women are too often seen just as procreators and mothers. This makes efforts to assuage high maternal death rates too parochial. Specifically, are there lifestyle choices or societal pressures that increase a woman’s risk of retracting fatal diseases that are independent of gender? Is this an unaddressed dimension when discussing high maternal death rates? The floor also enquired into how Laos’ illegal abortion rates, unsafe abortion rates and its current prohibitive abortion policies contribute to its substandard maternal death rates.

Moving onto gender violence, four forms of women-directed violence were outlined: physical, phycological, sexual and economic property violence. This delineates four avenues to approach female discrimination by with to approach Laos’ current state of affairs, although they were not elaborated upon in the conference. In closing, the panel was questioned whether current Laos gender equality programs are financially designed to withstand funding cuts, or are they more comparable to ‘window shop’ programs. 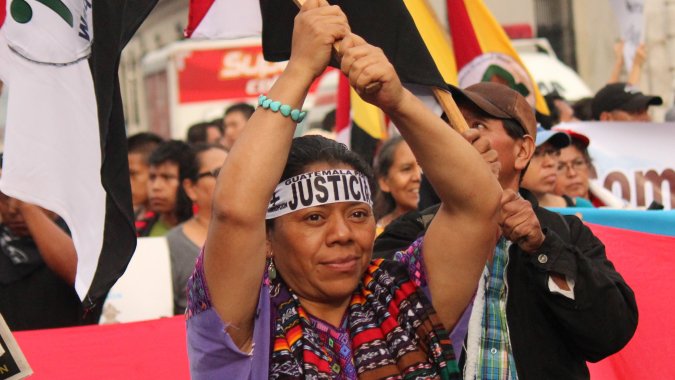 Bad mothers. Loose Morals. Lack of femininity. That is how world leaders such as Philippines President Rodrigo Duterte and President Donald Trump refer to women’s rights activists. Both men have continuously made women the butt of the joke of their presidencies with Donald Trump’s famous “Grab her by the pussy” and President Duterte’s continuous rape jokes and command to shoot women rebels in the genitals. According to the Andrew Gilmour, Assistant Secretary-General for Human Rights, this is the continued norm of how the world treats women.

The conference held on July 26th, 2018 shed light on the deeply rooted patriarchy engrained into our international system that has resulted in the championing of white males in human rights movements and the vilification of the women actually affected.

Lolita Chavez has been the target of 5 assassination attempts, two massive hate attacks, lynching attempts, accused of illegal entry, and has had more than 25 petitions filed against her in court resulting in a forced exile from Guatemala. What could cause this type of horrific backlash on a 5-foot-tall mother of 2? Her advocacy for indigenous people and the environment. In Uganda, Brenda Kuganza has been punched in the gut by a policeman, slaughtered on social media for defending victims of sexual violence and has had to witness her friends be brutally attacked, arrested, and/or killed for wanting the right to say no.

People trying to defend their territories and rights are sidelined – jailed, tortured, raped. Now more than ever, there is a need for concrete action from the international community but also a needed refrain by states in legislation and policy of repression action against human rights defenders. The governments in places such as Guatemala, Uganda, Nicaragua need to make the role of human rights defenders facilitative not restrictive.

There needs to be an understanding that human rights defenders are not performing a job. There is a deep commitment to protecting life, livelihood, and the dignity of communities. That is what empowers these women to endure layers of oppression and brutality.

Meeting: Committee on the Elimination of Discrimination Against Women; 72nd Session

This event took place on the 20th anniversary of the adoption of the Rome Statute. On this basis, the International Criminal Court (ICC) was established to prosecute individuals for war crimes, crimes against humanity and crimes of genocide. The discussion began by focusing on the withdrawal of Burundi from ICC. Speakers acknowledged the need for sufficient resources to deliver efficient judgment.

Concerning the investigation power of ICC, Mr. Stephen J. Rapp, former US ambassador-at-large for global criminal justice, illustrated the mechanism that ICC considers cases only after referral by Security Council. He pointed out cases which failed to be brought to ICC, including Syrian crisis and Rohingya persecution in Myanmar. Also, Mr. Christian Wenaweser, permanent representative of Liechtenstein, recognized the political reality of the dysfunctional Security Council and the consequence it has on criminal justice.

The discussion ended with speakers’ vision of ICC in twenty years. Mr. Stephen J. Rapp expressed his will that ICC could operate like a regular court. Mr. Christian Wenaweser expected that ICC could safeguard criminal justice at the global level. In addition, he called for an effective use of principle of complementarity. In this regard, he hoped to see cases of serious crimes to be firstly dealt within national jurisdiction. All in all, speakers agreed that ICC should operate effectively and efficiently.

Meeting: Panel discussion: Twenty years of the Rome Statute system and a look ahead to the future of the International Criminal Court (co-organized by the Permanent Mission of Liechtenstein and the Wayamo Foundation)

H.E. Ms. Aurelia Frick, Minister of Foreign Affairs of the Principality of Liechtenstein; 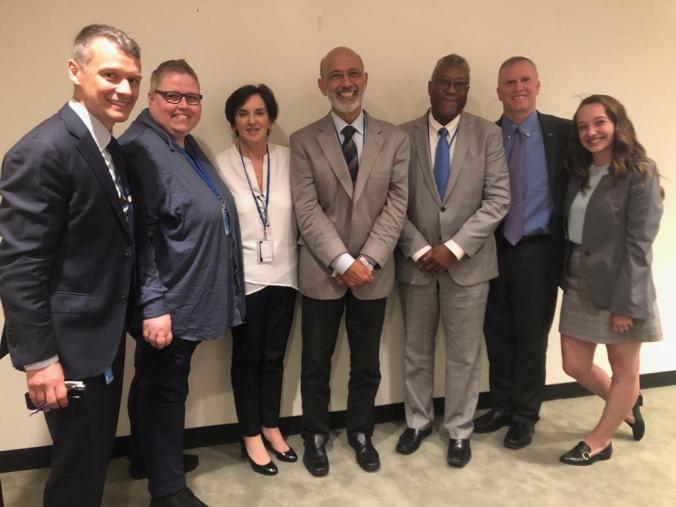 In conclusion there was a call to action on behalf of older LGBTQI people. More public information on catering the social, psychological and medical needs of older LGBTQI population should be disseminated. More trainings on providing gender-friendly services at elderly care centres and public housing should also be provided. 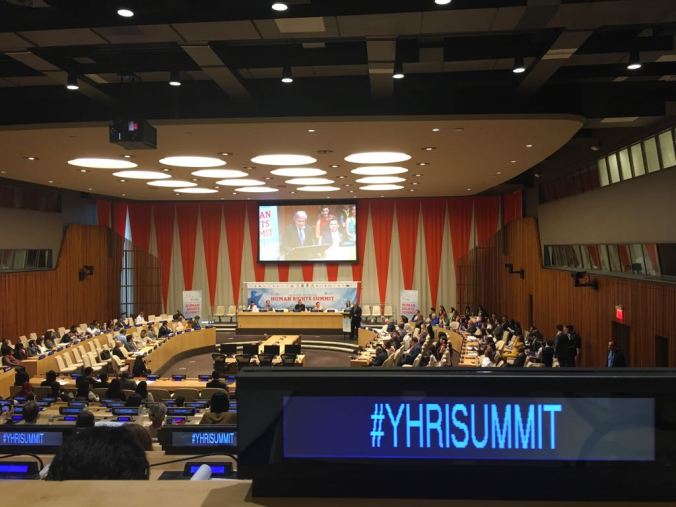 The Universal Declaration of Human Rights marks its seventieth anniversary this year. In recognition of international efforts to advocate human rights, the Human Rights Summit aimed to improve the state of human rights in respective nations and communities.

Second, the summit addressed local issues on human rights to eradicate injustice and inequality. From the perspective of police forces, Mr. Ricky S. Veerappan from Canada and Mr. Charalambos Philippides from Cyprus outlined how their police forces have established education centres to implement age-appropriate human rights measures. From the perspective of non-governmental organisations, they have introduced outreach programmes focusing on fair education, sanitary care for females, empowerment for youths and democratic citizenship. They have drawn international attention to marginalised, vulnerable social groups around the world, including children, youths, women and the elderly. Representatives from war-affiliated countries, such as Afghanistan, Syria and Sudan, further advocated that human rights are the cornerstone of achieving long-term conflict resolution.

Terrorism poses a threat to peace and security. Iraq has successfully defended itself from the threat of its global spread. They are committed to respecting and upholding the council’s resolution. In this meeting, they affirmed their commitment to countering terrorism and continue to seek international support for their efforts.

Ambassador Sanchez had a few reflections in his speech to the council. First, that terrorism is a global threat and that no state is immune to it or should have to fight it alone. To combat this global threat, we must avail ourselves of sufficient tools and work together. Second, if we all implement our current obligations, the results would no doubt be superior. He stated that we are not doing bad (in regards the global fight against terrorism) but we could be doing a lot better. We need to keep in mind that holding those accountable for war crimes and prosecuting the offenders is crucial in this process.

Neutrality is a key principle in pursuing threats and joint efforts must meet joint operational solutions.

Another issue is information not being shared enough regarding threats. The Representative of INTERPOL encourages the continued sharing of terroristic information through the I24-7 system. Information conveyed through the INTERPOL channels only matters if it reaches the right hands.

By expanding international cooperation particularly between agencies and institutions, we can achieve better results in the fight against global terrorism.

Major General Maher Najem Abdulhussein, Undersecretary of the Ministry of Interior of the Republic of Iraq for Intelligence and Criminal Investigations