Panellists exchanged their ideas towards better integrated planning and risk management, in particular the context of increasing funding streams to manage crisis risk. Mr. Mundele addressed four key points, including the humanitarian context in DRC, economic progress of Congo, history of the management and humanitarian framework in DRC, the mechanisms of economic stimulus and community resilience in post conflict. He emphasised the focus should be put on the prevention program of disaster risk to evaluate the Congo’s Framework for Action and develop the contribution of Africa to the establishment of the post-2015 framework.

Mr. Soumaré pointed out that humanitarian organisations and the Governments should plan and work together. “Government leadership is the key”, he said. Not only does it encourage humanitarian and development organizations to work more effectively, it also multiplies the impact. Mr. Jean noted that this is an important issue in Haiti; one of the most vulnerable countries, exposed to all sorts of catastrophes, including droughts, earthquakes, cyclones, etc. There are currently innovative approaches driven by Governments and the UN, however there is limited support from donors and a lack financing sources to develop innovative approaches to humanitarian work.

Mr. Clerg echoed Mr. Jean’s comments. He specifically focused on risk management in preventing humanitarian crisis. He concluded with three main calls for action. First, prioritizing countries at risk to ensure development aid goes to people and countries that are the most at risk. Next, humanitarian organisations should put high emphasis on managing the risk of crises, instead of just responding to its consequences. Lastly, crisis risk management should be prioritized in order to prevent and mitigate future humanitarian crises.

The Democratic Republic of the Congo is one of the wealthiest countries in Africa with an estimated US$ 24 trillion in diamonds and minerals beneath the ground. The DR Congo has been plagued by African civil wars, the second Congo War, beginning in 1998, ended in death tolls over 5 million. Many died because of displacement and having to flee from the land, causing diarrhea, pneumonia, malaria, and malnutrition. In 1999, the United Nations Security Council established MONUSCO, a stabilization mission and ceasefire agreement for the DR Congo.The Security Council met on Monday and the head of MONUSCO, Martin Kobler, as well as Mary Robinson, Special Envoy for the Great Lakes region of Africa, spoke on the political and military development in the DRC. 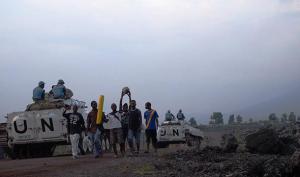 Martin Kobler, the special representative of the Secretary General for the Democratic Republic of the Congo and head of MONUSCO, spoke on the three most important pieces of the longterm peace plan. The first being security and protection. This piece of the peace plan has been tested recently with new uprisings and attacks in the country by rebel groups. Recent murders, mutilations, beheadings, rapes, and child executions are stripping the citizens and governments optimism for the future of security and protection. The second part of the peace plan is stabilization of conflict areas, and the third part the implementation of peace and cooperation framework. An added mission, to provide the government with increased agency to deal with the lack of public services such as school and health care, is to get the government back in control of the mineral mines so that the revenue can be used to grow and sustain the country.

To advance the peace and cooperation framework, MONUSCO is working hard with the Congolese government to settle the rebel groups and address the missions stated above. Mr. Kobler firmly stated, “Through military pressure, the FDLR (Rebel Group: Democratic Forces for the Liberation of Rwanda) must be left with no choice but to come out of the bush, the leadership must be left with no choice but to surrender, it’s racist ideology must be left with no choice but to disappear. This is the clear message of 2014.” The Congolese government also stating that security is their top priority in this new year. “The peace security and cooperation framework remains the best chance to achieve sustainable peace, security, cooperation and development in the great lakes region. The pace must be increased to maximize impact,” said Mary Robinson on her goals and insights into the future of peace in the Democratic Republic of the Congo.

For more information about MONUSCO, the DR Congo, and the current situation, please see the UN MONUSCO home page: Monusco.Unmissions.org