In accordance with UN General Assembly resolution 68/1, the Economic and Social Council (ECOSOC) should further promote the integration of youth into its deliberations, building on the past positive experiences of informal youth forums.

The aim of the Youth Forum was to bring the voice of young people into discussion on addressing the challenges for meeting the Millennium Development Goals and shaping the post-2015 development agenda. During the opening ceremony, Secretary-General Ban Ki Moon remarked, “There is a world of need out there, but also a world of opportunity. So I urge you to keep doing your part. Keep showing your leadership as global citizens” while urging attendees to “keep making a difference”. The Envoy on Youth, Ahmad Alhendawi spotlighted five thematic areas; education, employment and entrepreneurship, health, peace and security, and governance  as the greatest concern that threaten youth development in nation states. These areas were condensed after engaging more than 1.2 million young people through the My World 2015 survey and a crowdsourcing platform convened by UN agencies and partners. World Information Transfer’s DPI Representative, Apurv Gupta, was ranked 5 in the overall community, sharing recommendations on all thematic issues.

It was observed at the forums conclusion that employment was the key area young people wanted world leaders to focus on during the construction of the post-2015 development agenda. Currently, 75 million youth are unemployed, and more than 600 million jobs need to be generated globally in the life span of the new development agenda to absorb current unemployment levels and provide jobs to new labour market entrants. 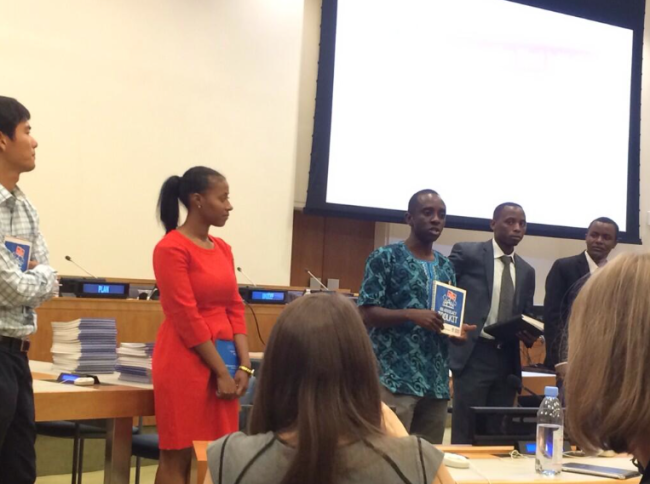 Today the Forum on Youth 2014 began in the Trusteeship Council Chamber. This afternoon’s meeting focused on reports from previous global and regional youth forums.

The meeting began with H.E. Mr. Dullas Alahapperuma presenting information from the World Youth Conference 2014, which was hosted in Sri Lanka. A total of 1,500 participants attended, most were youth delegates and civil society members. At this conference the Colombo Declaration on Youth was comprised, and the main focus of the conference was youth unemployment. The delegates suggested possible solutions to this including job creation, entrepreneurship incentives, more liberal access to education, and training and skills development. The conference also focused on ICT skills development, healthcare for youth, and gender equality.

Next, Mr. Doug Court spoke about the Global Summit on Youth and ICT, which took place last September in Costa Rica. This forum focused on entrepreneurship, governance, unemployment, and the environment; the factors most impacted by technology for youth. There was also discussion on how technology brings down barriers between citizens/youth and policy makers.

Mr. Gabriel Laurence-Brook then gave a statement about the International Organisation de La Francophonie (IOF), an organization committed to increasing youth action and supporting French-speaking youth. At the last IOF conference the delegates talked about youth involvement in creating the SDGs, and there was some debate over whether the youth agenda should be addressed in a cross cutting manner in all SDGs vs. having a specific SDG on youth. The forum also discussed strengthening youth decision-making bodies, access to decent and lasting jobs for youth, and programs to foster youth entrepreneurship. The next Conference will be held in Dakar, Senegal on November 29 2015, under the theme of “women and youth in the French speaking world as drivers for peace and development”.

Lastly, Mr. Alejo Ramirez spoke on behalf of the Ibero-American Youth Organization, which represents youth from Latin America, Spain, and Portugal. So far, this organization has found that young people have not played an important enough role in the creation of the SDGs, and their role must be made larger. He also called upon the SDGs to lift people from poverty, as well as focus on employment and healthcare for young people.

Opening of the Forum on Youth 2014

As emphasised by H.E. Secretary General, today’s youth are leaders in all areas from technology to politics, the arts to science. Already young people are making their mark on history by altering traditional power structures. H.E. Ban Ki-moon asked that the youth continue to play their crucial role challenging and transforming the future.

H.E. Martin Sajdik, President of the Economic and Social Council (ECOSOC), praised our youth as catalysts for change, as their imagination and energy innovates societies to grow and achieve a greater quality of life. H.E. Martin Sajdik asked the world to include the youth population, totaling 1.8 billion, to revolutionize our global system as providers, problem solvers and mentors.

H.E. John Ashe, President of the sixty-eighth session of the General Assembly, explained his desire for youth to get involved especially as nations are working together towards setting agendas post 2015. These ‘sustainable development goals’ aim to transform our world by 2030, a period that will be run by leaders who are the youth of today. Therefore youth participation is essential so that their vision is encapsulated in the UN’s mission.

Youth Advisor for CIVICUS Alliance, Ms. Brittany Trilford shared that 85% of the youth population lives in developing countries. These people are the next generation of workers, leaders and activists. Therefore they should be targeted in development schemes.

Mr. Ahmad Alhendawi, the Secretary General’s Envoy on Youth, explained the global connection amongst young people, through the same struggles to realise the same aspirations. Mr. Alhendawi believes an important element to the post 2015 agenda should be the role of young women as assets and drivers for development.