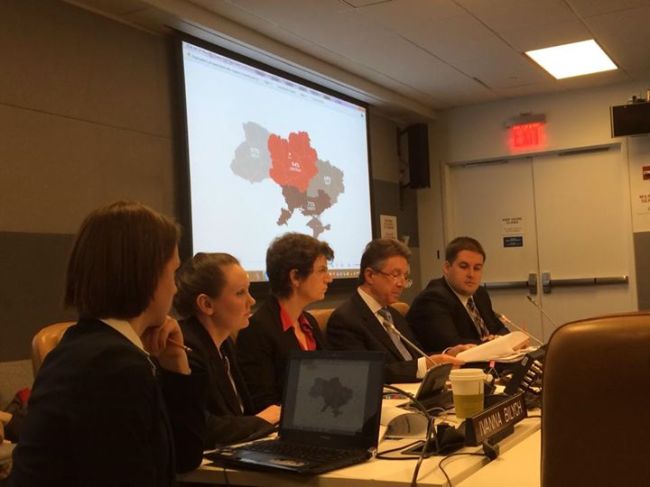 Today at the United Nations Headquarters, an international team of legal scholars from the organization RAZOM, presented their report, The White Paper – “Crisis in Ukraine: Its Legal Dimension”. RAZOM is an NGO established to support the people of Ukraine in their continued quest for democracy, justice, and human rights. The report gives policy makers and diplomats the legal tools to help stop further escalation of the current crisis threatening Ukraine’s peace and the international order. Lawyer and co-author of The White Paper, Ivanna Bilych, elucidated that, it is the first and only report that provides an in-depth look at the current situation in Ukraine. It also gives the International Community a solid recommendation on how to deal with the Russian Federation. Recommendations include reframing from recognizing Crimea as part of Russia, which the UN GA established back in March 27th, with 100 votes against the Crimea Referendum.

The Ambassador of Ukraine made it clear that Ukraine is NOT at civil war. The current situation is due to unilateral actions by the Russian government violating international law and the principles of sovereignty, which are central to the United Nations. Russian polls suggested that 97% of Crimean residents wanted to join the Russian Federation, however The White Paper shows that the fate of Crimea was decided by just 15% of the population who were in favor of the Russian invasion. Ambassador Sergeyev insists that much of Russian voting statistics should be disregarded due to duress, as violence and force played a major role in their illegal placement in Crimea.

In response, the delegate of Canada openly affirmed their strong support for the Ukraine, having already placed sanctions against Russia and travel bans on Russian and Ukrainian officials involved in the illegal Crimea Referendum. Canada has also promised to provide monitors, to ensure a free and democratic environment for the upcoming election, and will be financially supporting Ukraine with $240 million in loans and bilateral assistance. Poland and Latvia also declared their support for Ukraine and insisted that Russia has fundamentally broken international law with their invasion of Crimea. These delegates commend The White Paper’s recommendations going forward in ensuring Ukraine’s sovereignty based on their signing of the Budapest Referendum.

Ambassador Sergeyev, the Razom Organization and the international team of legal scholars that put together this document, encourage all people to access The White Paper and ensure that they keep actively informed.